Survive the Disasters 2 Wiki
Register
Don't have an account?
Sign In
Advertisement
in: Featured Articles, Bosses, Disasters,
and 4 more

Yojimbo is a Boss in Survive The Disasters 2.

Yojimbo will spawn at the middle of the map, and usually dash around the map to attack players. He has 4 unique attacks:

The Hyper Yojimbo, also known as Masamune, is a superboss in Hardcore Mode, along with Reaper and Black Mage. Overall, he doesn't have many different attacks compared to his standard variant; instead, he uses them in a much quicker and deadlier speed. Yojimbo's attacks fashion become red, but deal the same damage. The round lasts for 150 seconds in Hardcore Mode compared to the standard 60.

"Yojimbo the mighty-nimble samurai slashes in! He has an attack allowing him to quickly dash to a random Enemy Spawn point that deals 80 damage when you're in the way. He also has a ranged shockwave attack that does 80 damage to the closest target. Sometimes he will throw kunai knives at random targets, That deal 45 damage. If you're standing too close to him, he will do a melee slash that will instantly kill you. Take cover and be weary where the Enemy Spawn points are."

"Masamune, the hyper version of Yojimbo slashes in! All attacks do the same damage but are deadlier in a way. His sword wave attack travels faster and farther, his kunais explode after 1 ~ 1.5 seconds after hitting surfaces. Instead of dash teleporting 1 ~ 3 times, he does it 3 ~ 5 times and quicker! When the music reaches the climax, he'll then use his dash teleport move. Overall, all of his moves are sped up, be very cautious!" 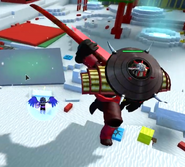 Masamune swings his sword at a player.

Masamune prepares to use a dash attack.