Survive the Disasters 2 Wiki
Register
Don't have an account?
Sign In
Advertisement
in: Disasters, Bosses, Enemy,
and 3 more

Reaper is a boss in Survive The Disasters 2. He is also one of the three super bosses in Hardcore Mode, being known as the Crimson Reaper.

Reaper has two different attacks and lasts for 60 seconds, attacking players throughout until killed, time runs out, or all players are killed, in which case it'll start attacking at random spots.

The Hyper Reaper, known alternatively as the Crimson Reaper, is a super boss, along with Black Mage and Yojimbo in Hardcore Mode. It has five different attacks compared to the original Reaper's two, and lasts for 150 seconds.

"It's Reaper! It will make a slash motion making a giant dangerous wave that moves across the stage. This attack kills you instantly, so beware. It can also launch three fireballs at you, which move faster than the kill wave, but does only 33 ~ 55 damage."

"Aside from standard reaper, Crimson Reaper has 5 moves instead of 2. Similar to Reaper, he has a slash attack but does it 3 times quickly. The slashes are smaller, but move slightly faster. His second main attack launches a giant slow-moving sphere that approaches random targets. If you're nearby the sphere, you'll be shocked 20 damage. When Crimson Reaper slams its scythe to the ground 1 of 3 things will happen: multiple homing spikes or large pillars will appear from his scythe, or we'll summon a damage reflector in front of him. Attacking him in this state will return 25% of the damage you inflicted to him, so watch out for that! All red hit boxes are instant-death aside from the lightning strikes." 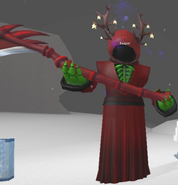 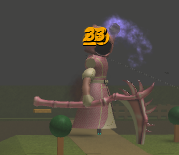 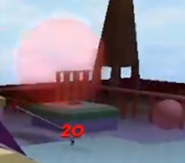