Raining Tacos are a disaster in Survive The Disasters 2.

Tacos begin to rain down from the sky! They will land on any surface after they are dropped, and are fatal upon touch. It is wise to hide or get to places where they can't fit in.

For the hyper counterpart, Raining Tacos may vary in size and drop more frequently.

"It's raining tacos! Each taco instant-kill when touching them. Hide under cover! A taco will drop every .7 seconds, 32 times."

"Comparing to the standard version, a taco will drop every .25 seconds 100 times. The taco is varied in sizes as well, potentially letting smaller sized tacos enter opened-covered areas." 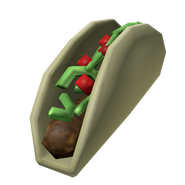 A model of a taco. 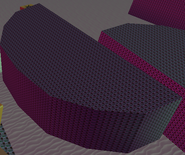 A taco with glitched textures.