Survive the Disasters 2 Wiki
Register
Don't have an account?
Sign In
Advertisement
in: Disasters, Trap, Insta-kill,
and 2 more

Press The Button is a disaster in Survive The Disasters 2.

A green button appears in the very center of the map. Unless it is not pressed at all, an enormous red kill box will spawn and instantly kill any player that is not in the center or corners of the map, which are the save zones for the standard version. The button turns red and the kill box will disappear after a second or two.

For the hyper counterpart, the button can appear in any enemy spawn point, as opposed to the center. The time taken for the kill boxes to appear increases to five seconds, but the safe zones are only within the vicinity of the button in its center. The button will activate itself if it is left unpressed after 21 seconds.
For the impossible counterpart, the round duration is halved. The safe zone is enclosured to the button area itself, with about two extra studs on each side. Like the hyper variant, the button will activate itself if left unpressed, at about the 8 second mark. The button's kill walls still spawn 5 seconds after it is activated.

"A button appears at the center of the map! Pressing the button will create kill walls around the button. Corners are safe from the kill walls, so you could always go there if you don't think you could make it to the middle."

"Comparing to standard Press The Button, the button will appear on a random enemy spawn than normally spawning in the center. However, the time to spawn the kill walls is extended, taking 5 seconds for it to appear. Make sure you utilize that time to find it whenever someone presses it. If the button is left unpressed for 21 seconds, it'll activate itself."

The button with the Illumina on it, during the April Fools 2018 update. 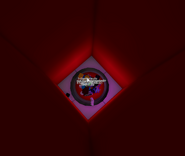 The safe zone of Impossible Press the Button.