Survive the Disasters 2 Wiki
Register
Don't have an account?
Sign In
Advertisement
in: Disasters, Humanoid, Chase,
and 3 more

Overseer Soldiers are a disaster in Survive The Disasters 2.

Overseer Soldiers are dangerous humanoids that target the closest survivors. They wield an overseer axe and will occasionally throw it towards players if they are far away from them, meaning they have a ranged ability. Their axes deal damage upon contact if you're close enough. Overseer Soldiers also have one last but powerful attack, which is to slam their axes on the ground, creating a small cluster of two explosions in front of them. This may be fatal if they are in groups and players don't keep enough distance away from them.

For the hyper variant, Overseer Soldiers are slightly faster and may attack more often. Their slam blasts also have a cluster of three explosions instead of two.

"These soldiers have two attacks: they will throw their axe on you dealing 40 damage if you are ranged or slam on the ground creating two medium sized explosions if you're close. Touching their axe on their hand does 25 damage. It's best to distance yourself away from them, while watching out for the throwing axe. Overseer soldiers have a walkspeed of 18."

"Comparing to the standard: Overseer soldier's explosive ground attack now has 3 explosions, and they slam faster. They also have a walkspeed of 22."

A model of an Overseer Soldier.

The size of the Axe after attacking. 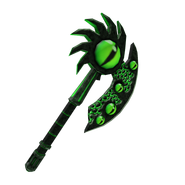 A model of the Overseer Sodier's Axe.