Survive the Disasters 2 Wiki
Register
Don't have an account?
Sign In
Advertisement
in: Insta-kill, Enemy, Hyper,
and 3 more

Neon Trooper is an enemy which flies around the map. It fires 6 colorful beams from its launcher which deals 20 damage each. When the timer reaches 8 seconds, it will fire a large beam which insta-kill players, similar to Neon Blaster's.

"Neon Trooper X ambushes the map! It'll fly a random spot to another. Once It Stops, it'll lock on to a nearby survivor shooting 6 quick laser beams. Each laser bullet does 20 damage, and cannot pierce through walls. When the round is about to be over, Neon Trooper X will blast a giant laser at a random survivor. The laser on contact is one-hit KO." 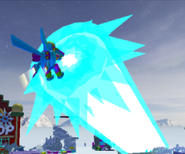 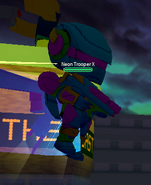 A closer view of Neon Trooper when shooting the final blast. 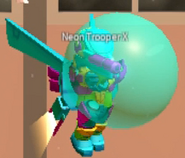 Neon Trooper charging the final blast, in the same way as Neon Blaster.