Survive the Disasters 2 Wiki
Register
Don't have an account?
Sign In
Advertisement
in: Disasters, Humanoid, Insta-kill,
and 2 more

Murderers are a disaster in Survive The Disasters 2.

Four Murderers spawn from the enemy spawn points; they are all characters of developers on Roblox that created Murder Mystery related games: CloneTrooper1019, Nikilis, loleris and taymaster.
Murderers are three deadly elements packaged into one: instant-kill, perfect aim and fast movement. They will throw fatal knives at the nearest survivors, following them if too far away. Make sure you hide behind walls and buildings to stay safe. Murderers can be tricky especially if there are not many places to hide, as they are able to instantly kill you.

For the hyper variant, Murderers gain the ability to throw knives quicker and have shorter reload times. They also have faster movement speed.
For the impossible variant, Murderers follow the players more often and quickly, throwing the knives considerably faster. Murderers gain yet another ability: their knives ricohet onto nearby players if they successfully kill a survivor.

"Comparing to standard Murderers, they will throw knives twice as fast. They have a faster walkspeed of 28." 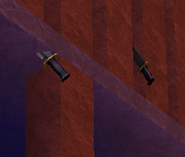 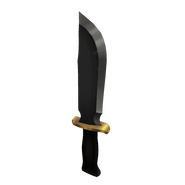 A model of a knife.