Survive the Disasters 2 Wiki
Register
Don't have an account?
Sign In
Advertisement
in: Disasters, Trap, Target,
and 3 more

Lumberjack is a disaster in Survive The Disasters 2.

Lumberjack spawns at the back of the map, holding an axe near a giant tree. After a few seconds, he'll then start chopping the tree, which crushes across the map in a position which is the average distance between all survivors. The log is instant kill when touched, but leaves aren't. It's wise to get to the corners of the map.

For the hyper variant, the tree is much wider. Lumberjack also chops down the tree in a quicker manner.
For the impossible variant, Lumberjack will chop the tree even more quickly, with multiple hits, as soon as the disaster starts. Also, the tree he cuts down is much thicker and has a big chance to land at a random direction rather than to target the players' average distance.

"A giant lumberjack appears! The falling tree will fall on the average distance between all survivors. The tree is instant death when you touch it."

"Comparing to standard version, Lumberjack cuts the tree twice as fast and the tree is 160% wider." 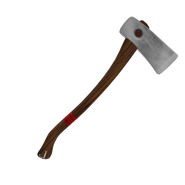 A model of Lumberjack's axe.