Korblox Mages are a disaster in Survive The Disasters 2.

Korblox Mages are dangerous humanoids that spawn from the enemy spawn points. They do not normally attack players by chasing and hitting them, instead, they will use ranged abilities with their ice staff. Korblox Mages have two attacks:

"Korblox Mages! They can cast an iceball attack that deals 20 damage and has a 25% chance of freezing you. When on the ground near them, they will do a grounded ice attack, making a circle to trap you. Those kill instantly, so be careful! Korblox Mages have a walkspeed of 20." 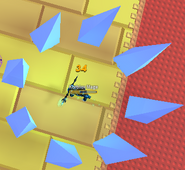