Featured Article
This is a featured article, and it's recommended for new users due to its high quality.

* Not to be confused with Green Hill Zone (Classic).

This content has been deleted from the current versions of Survive The Disasters 2.

Green Hill Zone is a Map in Survive The Disasters 2.

This map takes place in the first Zone of the first-ever Sonic the Hedgehog videogame title. Unfortunately, you won't find many loop-de-loops in the map itself.

The map has the classic house, as well as a bunch of small hills found throughout the map to avoid rising disasters like Flash Flood and Rising Lava. There's also a couple of playground towers on some of the hills, one small and one large. It also has a large amount of Rings, which gives players the Ring Collector achievement if they collect them. Overall, this map has many good places to be, and is beginner-friendly due to its layout and the Rings, which lets players who are quick enough grab some Coins to get orbs or gear quicker.

The classic theme for Green Hill Zone. Currently can only be found in Survive The Disasters 4.

For this theme of Green Hill Zone, the atmosphere changes drastically due to its orange color scheme. The music featured for this map theme is peaceful and really chill.

The blue variant for Green Hill Zone was first revealed in one of Vyriss's youtube videos, which showcased a very early Hyper Reaper boss fight and two of the 2D Impossible Disasters. This theme was supposed to be the Hardcore theme, as known as the Hill Top Zone, featuring blue hills and the skybox changed to a very tall plateau.

Green Hill Zone had its colors changed temporarily in Version 1.23, donning a gray, yellow, purple, and light green color palette. The skybox also changed, with darker mountains and a gray sky with brown details. The main house was also changed.

Green Hill Zone had its colors changed temporarily in Version 1.25, donning a blue, light blue, and white color palette. The skybox also changed, with lighter blue mountain details, and a frozen river and waterfall. The main house also had changed.

In Survive The Disasters 4, Green Hill Zone received a mysterious red ring (which randomly replaces one of the rings), if a player collects this ring, static will appear on all player's screens for a few seconds, then the map switches into a horror-themed version of it, with red and black textures (similar to the sonic.exe creepypasta). 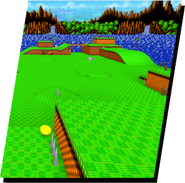 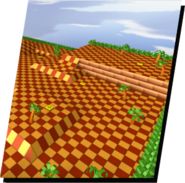 Green Grove as seen in the alpha.

a whole map where changed to sonic.exe before player who collect the red ring in survive the disasters 4 or 3
Add a photo to this gallery
Retrieved from "https://sd2.fandom.com/wiki/Green_Hill_Zone?oldid=23409"
Community content is available under CC-BY-SA unless otherwise noted.