Survive the Disasters 2 Wiki
Register
Don't have an account?
Sign In
Advertisement
in: Disasters, Explosive, Rain,
and 3 more

View source
This article is about the Dynamites disaster. You may be looking for the Dynamite (Item).

Dynamites are a disaster in Survive The Disasters 2.

Dynamite sticks start to constantly rain down from the sky. These explosives will land on any surface they hit and will bounce at a certain angle. After a few seconds, they will flash white a few times until they explode, creating a fatal explosion. It's wise to keep distance from the dynamites and constantly move with speedy gear, such as Speed, Fusion Coil or Epic Katana, in order to avoid the blasts.

For the hyper counterpart, more Dynamites fall down, while their fuse time and explosive radius are buffed.
For the impossible counterpart, the dynamites fall at a very fast rate and have an extremely large blast radius. They also have very short fuse times, which is almost impossible or very hard to get away from it in time using an Epic Katana or Game Master's Sword.

"Large dynamites will fall from the sky! It takes about 6 seconds for them to detonate. Distance yourself away from these bombs best as possible, as they have a large blast radius of 36. Scroll out all the way to know where they're landing!"

"Comparing to the standard version, dynamites fall down more frequently and detonates quicker. They have an explosive blast radius of 48."

A player surviving Impossible Dynamites. Their explosions are shown in the background. 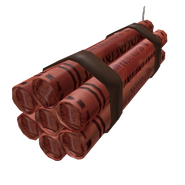 A model of a dynamite stick.