Survive the Disasters 2 Wiki
Register
Don't have an account?
Sign In
Advertisement
in: Disasters, Bosses, Enemy,
and 3 more

Black Mage is a boss in Survive The Disasters 2. She is also one of the three super bosses in Hardcore Mode, being known as the Dark Mage.

Black Mage has two different attacks and a healing ability. Every time Black Mage does a spell attack, she will raise her magic staff. The round lasts for 60 seconds, attacking players throughout until killed, time runs out, or all players are killed, in which case she'll start attacking at random spots.

The Hyper Black Mage, known alternatively as the Dark Mage, is a super boss in Hardcore Mode, along with Reaper and Yojimbo. She receives a significant buff to her health and damage, alongside a new set of attacks. The round lasts for 150 seconds in Hardcore Mode. Her clothing is re-textured to have a darker tone. Dark fog will also occur on the map. Fireballs summoned by Dark Mage are now purple in color. Dark Mage has four attacks and a healing move:

"Black Mage attacks with black magic! She can cast a poison gas nearby a random survivor with a decent radius, damaging 18 per second if you're in it. She can summon giant fireballs from the sky that deal 80 damage per hit! She also has a healing ability that can regain 300 health when she has taken damage." 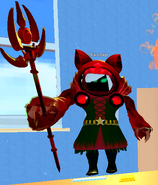 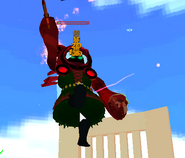 Dark Mage being bloxxed with the Darkheart.